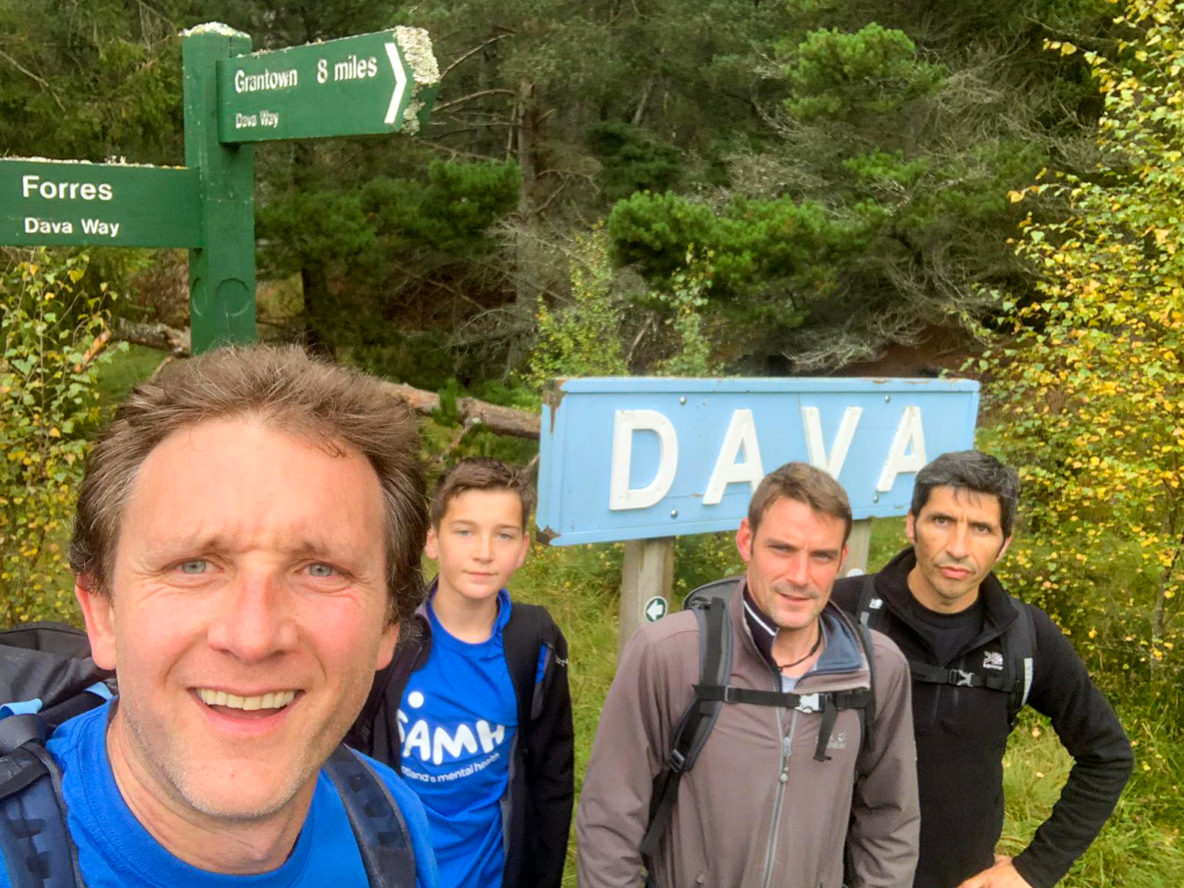 On Sunday 29 of September, alarm clocks were set as AES Solar awoke bright and early to undertake a 44 km walk for charity.

The walk consisted of The Dava Way, a 38 km walk from Grantown-on-Spey to Forres. Determined to outdo themselves, the AES Solar team would then continue onto Findhorn to eclipse their 40th birthday milestone. 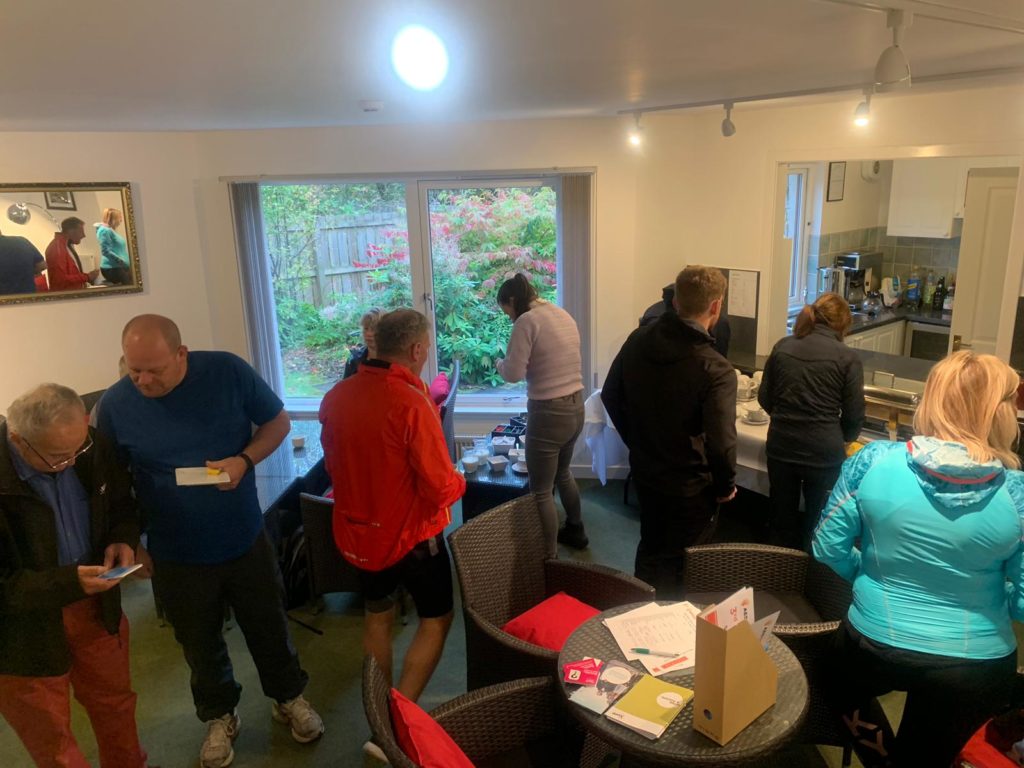 The team tuck into some well deserved and needed breakfast rolls

The marathon march commenced at 8 am in Grantown-on-Spey. The team congregated at The Pagoda where breakfast rolls and hot drinks were kindly put on for the team. This was a welcome energy boost for the walkers and their last hot meal (for a while at least).

A staggered start was initiated with the core group of 23 walkers (and a couple of furry friends) setting off at different times. This allowed amateur walkers a head start with the goal of reaching the endpoint at the same time.

The first checkpoint situated 13.25 km (8.25 miles) into the route was the Dava County Boundary for Moray and Highlands. The designated support drivers for the day, George Goudsmit and Cameron Duncan, were patiently waiting in preparation for the weary walkers.

They had car boots laden with water and snacks to allow the opportunity to take stock and refuel. This provided a welcome rest for anyone feeling the full effects of the first 8.25 miles. All 23 members reached this stage and continued onto the next checkpoint. 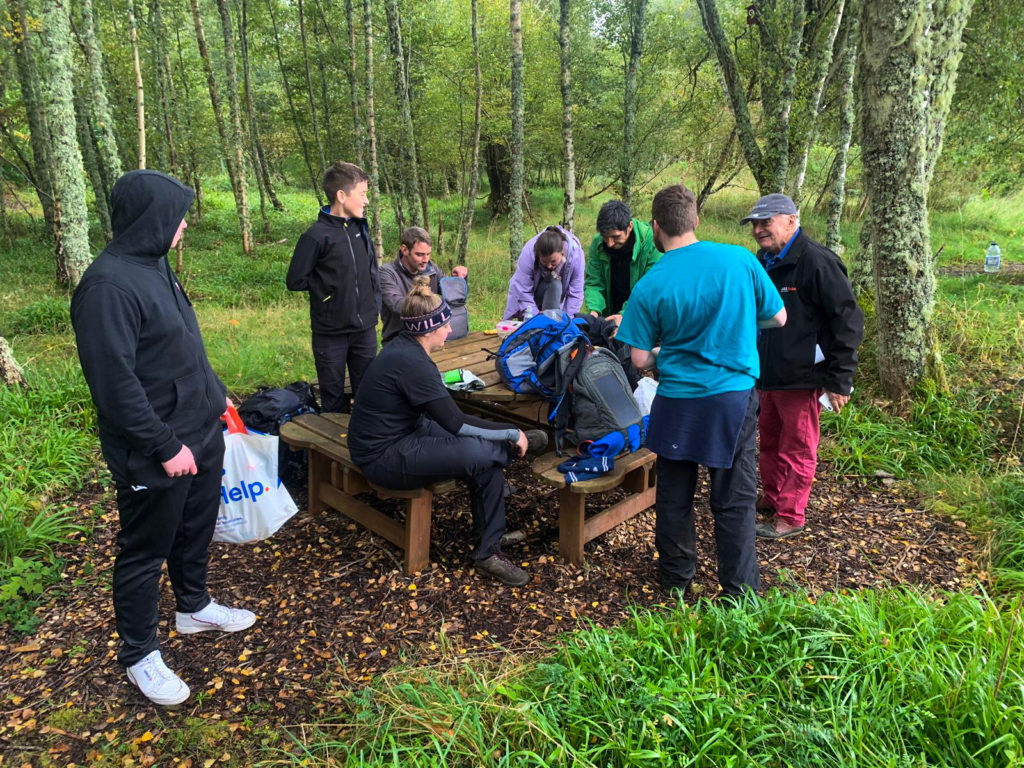 The second checkpoint located 23.75 km (14.75 miles) into the walk was the Edinkillie Community Hall. This was an ideal spot to grab a spot of lunch and fuel up. We did have a few people respectfully bow out at this stage. Nevertheless, after covering more than half the final distance this was a fantastic effort! 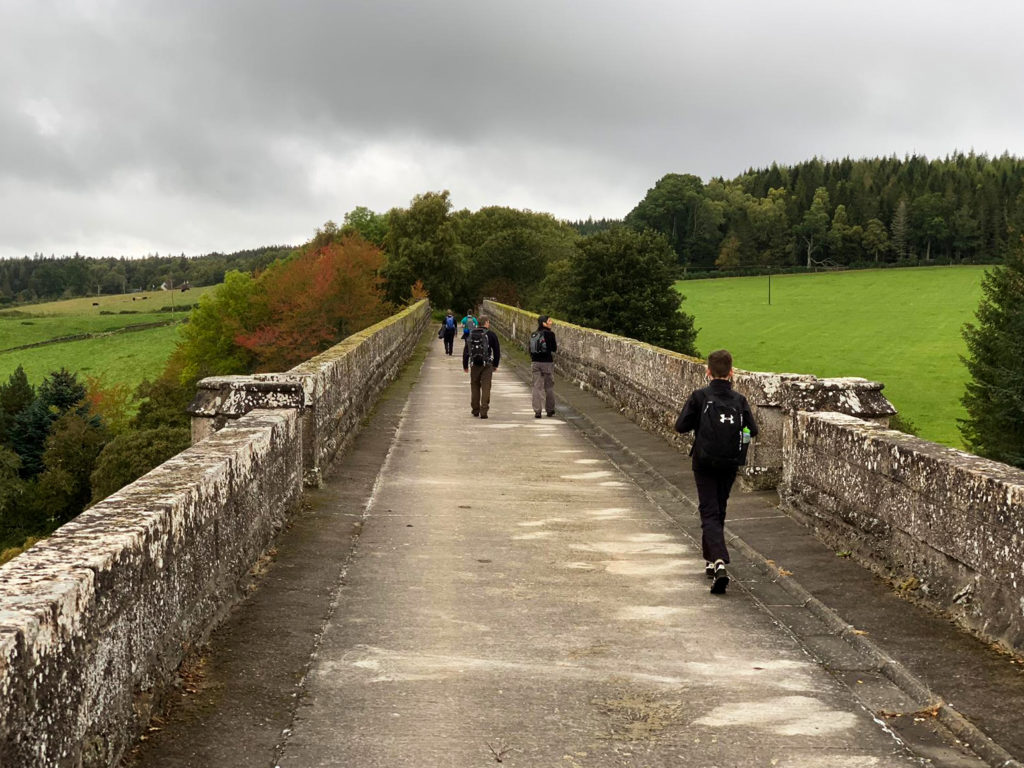 Those that were carrying on, continued onto the 3rd Check Point at Sueno’s Stone in Forres. This is the official endpoint of The Dava Way and consisted of a further 15 km (9.25 miles) and 38 km in total. We had 16 members out of the original 23 reach this point which is a stellar effort indeed!

However, by now there was definitely a few weary bodies and legs were starting to cry out no more. Those who had spent all their energy (and blister plasters) reaching this point were therefore dutifully picked up by the support team. We did, however, have a few determined members who walked the final 6 km (3.75 miles) to the Findhorn Foundation! This total came in at an impressive 44 km, symbolically concluding where AES Solar was founded in 1979.

Ghosts were the least of Lizzy and Sabine’s troubles

Around 6.30 pm the vast majority of the group, including those who had bowed out an earlier stage, reconvened at The Moray Art Centre. This was a chance to celebrate their victory and refuel on some well-deserved pizza. And of course, the perfect moment for a photo opportunity in our kindly donated SAMH t-shirts.

We’re delighted to say that our marathon march not only met but overtook our £1,000 target for the Scottish Association for Mental Health (SAMH)! To date, we have raised £2,370.00 which will go directly towards SAMH’s efforts to transform lives and help people with mental illness in the local area (Remember you can still donate here).

Technical Director, Campbell MacLennan who partly inspired the idea said: “I am delighted with the effort put in by those involved with the walk. From the timesheets, you can see everyone pushed themselves to undertake as much of the walk as they could. During the walk, we faced blisters, miserable weather, aching limbs but there was also a huge sense of team spirit. I’m very proud of AES Solar for undertaking this challenge to raise funds for such a worthy cause.” 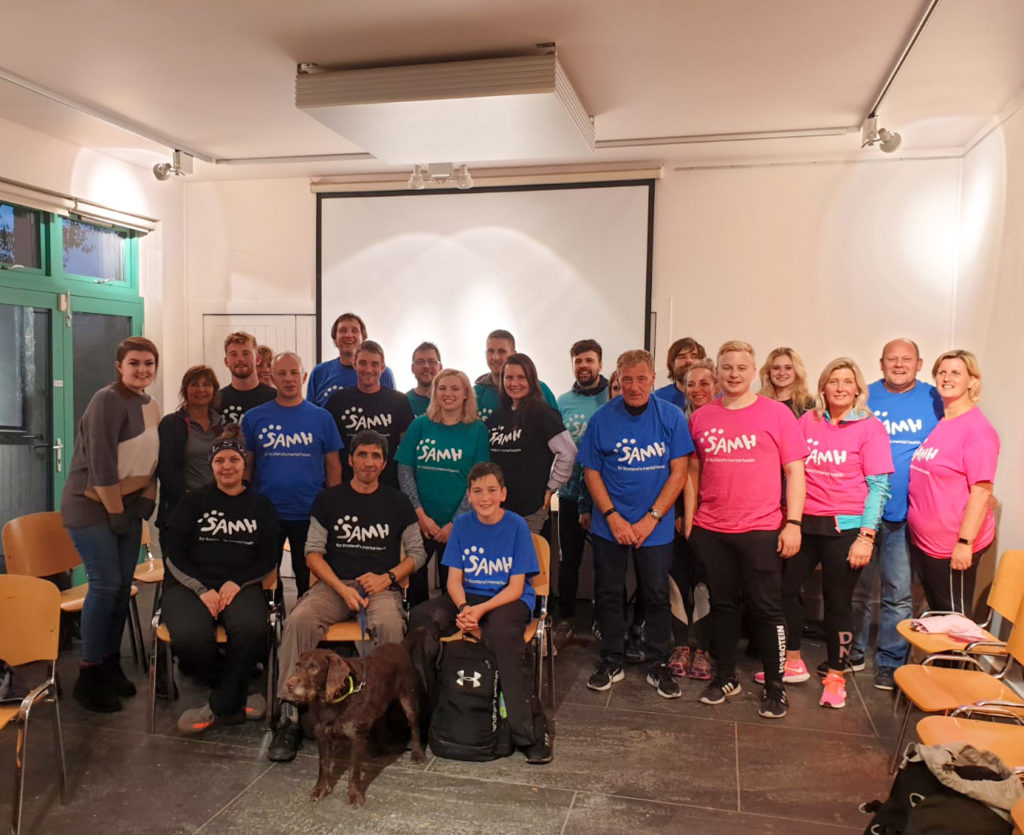 This was a real challenge for team AES Solar, even amongst the more experienced walkers. However, it was undeniably worth it knowing the temporary pain and discomfort would go towards vital mental health services in Moray. And of course, we couldn’t have done this without everyone who donated. We’d like to take this opportunity to thank everyone for your support, generosity and kind words. Every donation no matter how big or small made up this fantastic total. And this inspired and motivated us through every step of our marathon march fundraiser for SAMH.

Team AES Solar and their Friends and Family